In two earlier articles written on 29 and 30 Jan 2014, "Are Members of CHC Unconsciously Manipulated or Influenced to Toy with the Sedition Act?" and "Who is the Fairest One of All?", we saw how City Harvest Church leaders and pastors openly insinuating that the government and media had been "biased", "scared of CHC" and "unfair" in its judiciary process.

It got so bad that the church leadership even changed their statement of beliefs to remove clause 17 (recognizing that the government is ordained by God) and replacing it with another belief about marriage. They have since re-instated clause 17 and removed "about marriage". Somehow one cannot help but observe the wavering of their "statements of belief".

Insinuations of a Church Pastor

Recently, after the judge ruled that the 6 accused have a case to answer, a City Harvest church pastor, Mr Tan Kim Hock, in 2 tweets, insinuated again that the judicial system is biased in giving the Straits Times "preferential and privileged access to information" regarding the outcome of the "no case to answer" trial. The Attorney General Chabers (AGC) further took issue with his first tweet which insinuates that the State Court is "biased and unfair" (source:
AGC warns City Harvest pastor for 'contemptuous' tweets) 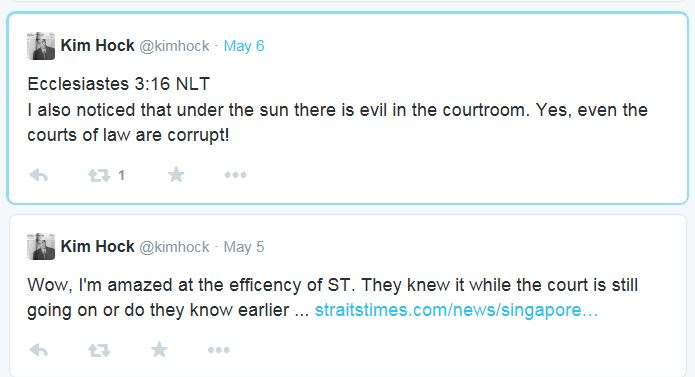 The AGC further states in their statement: "AGC takes the view that the insinuations set out in the two tweets are insinuations which scandalise the Judiciary of the Republic of Singapore. These insinuations are scurrilous, false, and made without any objective basis".

After his tweet was picked up by a local blog, TR Emeritus (source), Pastor Tan was quick to make an abrupt u-turn of his 2 tweets, with the following:

Obviously, the AGC did not share his opinion. The actions of the Pastor, who is also the Dean of the School of Theology, seems to be his undoing. He probably forgot his own wise words:

Pastor Tan was required to make a public apology which he has duly complied (source) on 6 June. It was not clear however, if this was acceptable since it was not displayed publicly but as a downloadable pdf file.

Implications of Such Insinuations

The effects of such insinuations by the leadership is a cause for concern, since leaders command an implicit form of trust and credibility among their followers. Perhaps the top-down effect of such leadership can be seen filtering down the ranks, resulting in the occurrences of members challenging the authorities - such as challenging COC's decision to suspend the 9, citing Operation Spectrum, and other occurrences.

Parents of young members should be aware of what was told to children and teens, and adult members should seriously check the facts from third-party sources before buying into a leader's opinion. For every official response so far related to the case, the court has proven that there's another story behind it. So it does weigh in to be extra cautious.

There Is a Case To Answer

At the end of the day, the facts revealed and evidences produced in court do speak for themselves. As much as City Harvest diehards (a.k.a. "Jihadists") have confessed, prayed and fasted for "no case to answer", there is a case which the 6 has to answer in regards to the CBT and falsifying of accounts charges. It should not be construed that the Christian God is powerless and cannot answer prayers of a sincere and faith-fill congregation. However, it should be seen that a righteous God cannot simply let such wrong unpunished, and that crime demands a price to pay. The facts itself proved that the courts and media has not been biased (at least compared with CityNews' selective omissions). Rather, on the contrary, it shows that the accused and those suspended by COC have something to hide.

There is more than meets the eye. Meanwhile, our most diehard fan should perhaps directing his tweet to our PM instead, for suing Roy Ngerng just because he was compared against Pastor Kong Hee in one of his blog post. 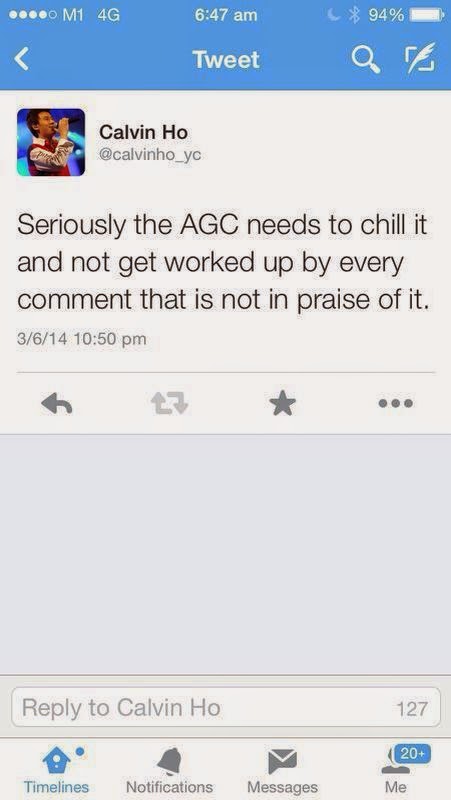