Are Members of CHC Unconsciously Manipulated or Influenced to Toy with the Sedition Act?

Is City Harvest Church turning into a anti-government religious institution? Just because 6 of the leaders were charged with Criminal Breach of Trust, Falsification of Accounts and Misappropriation of Church Funds does not mean that the government is anti-CHC. In fact, the Deputy Prime Minister, DPM Teo Chee Hean had explicitly stated the charges are related to individuals and have got nothing to do with CHC. Below is the statement issued by Ministry of Home Affairs stating the Country's stand on this case: 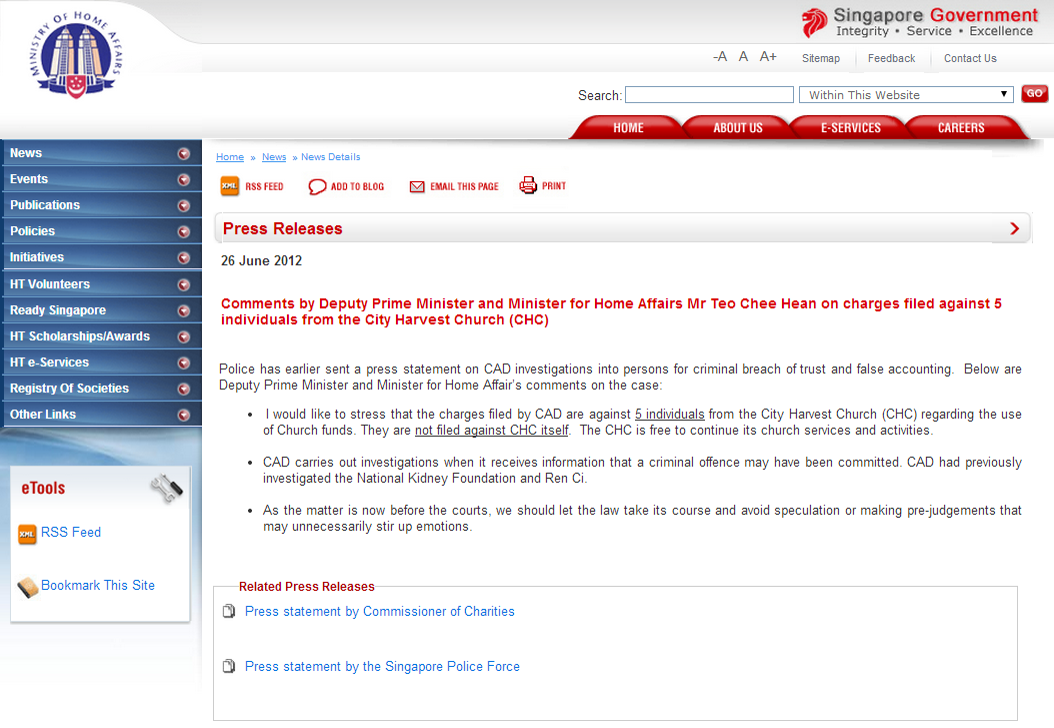 However, the leadership of CHC do not think so - and since the investigations began, the leadership from Pastors to Zone Supervisors and lay leaders have taken to social media to rally their displeasure with the government and stir up the emotions and sentiments about the government using their influence as religious leaders. Here's some examples:

1) CHC full time Zone Supervisor trying to insinuate that the government is not giving the accused a fair trial via their in-house news arm, City News SG's article: 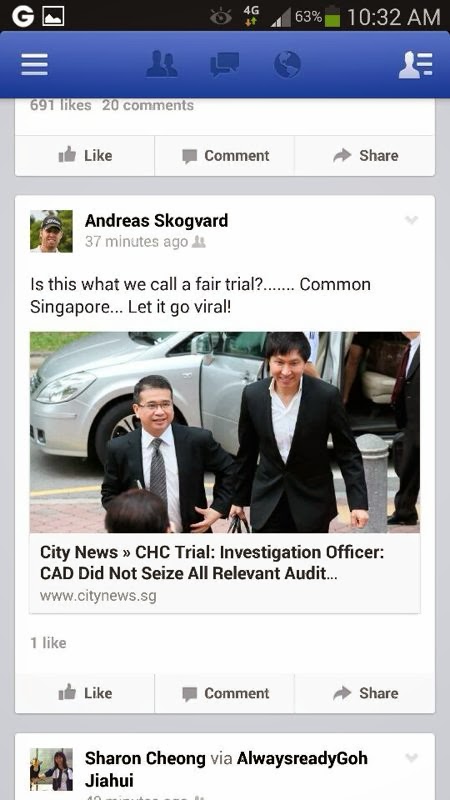 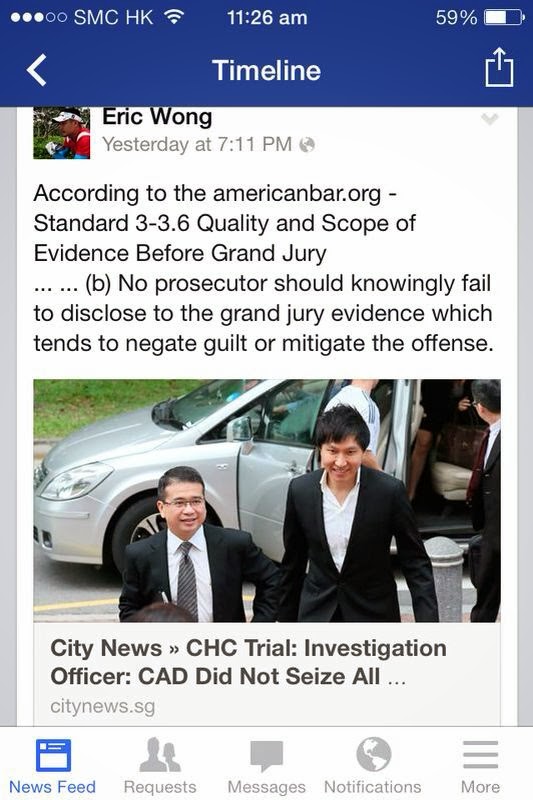 3) Teacher and long time member expressing his opinion according to a report by CityNews: 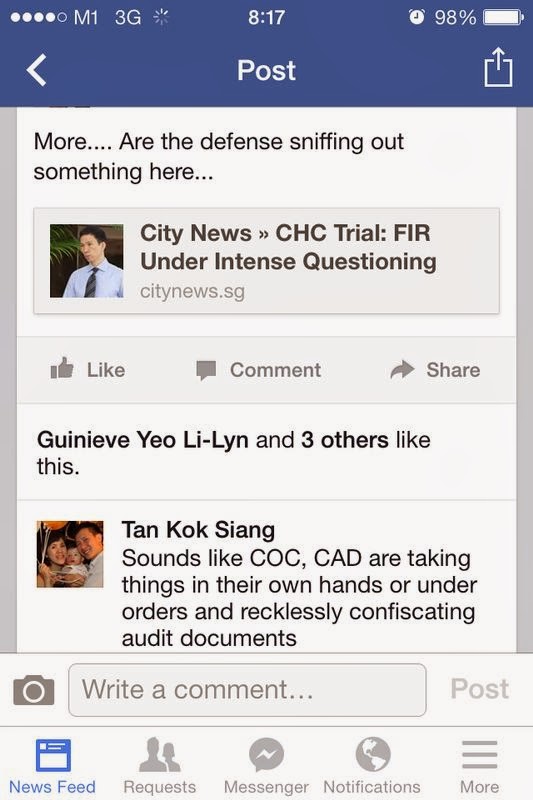 4) Leader from dialect ministry asking for a tax-rebate - implying??? 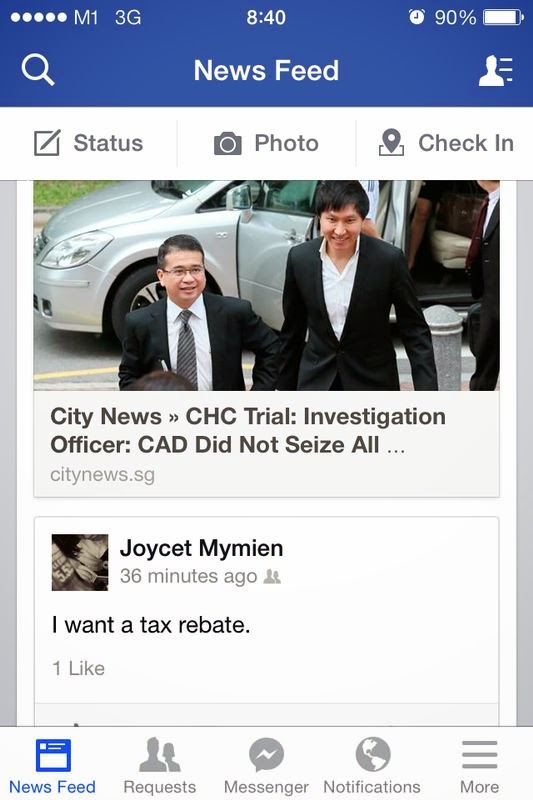 5) Full time pastor leading a charge to sign a petition. How many members followed? 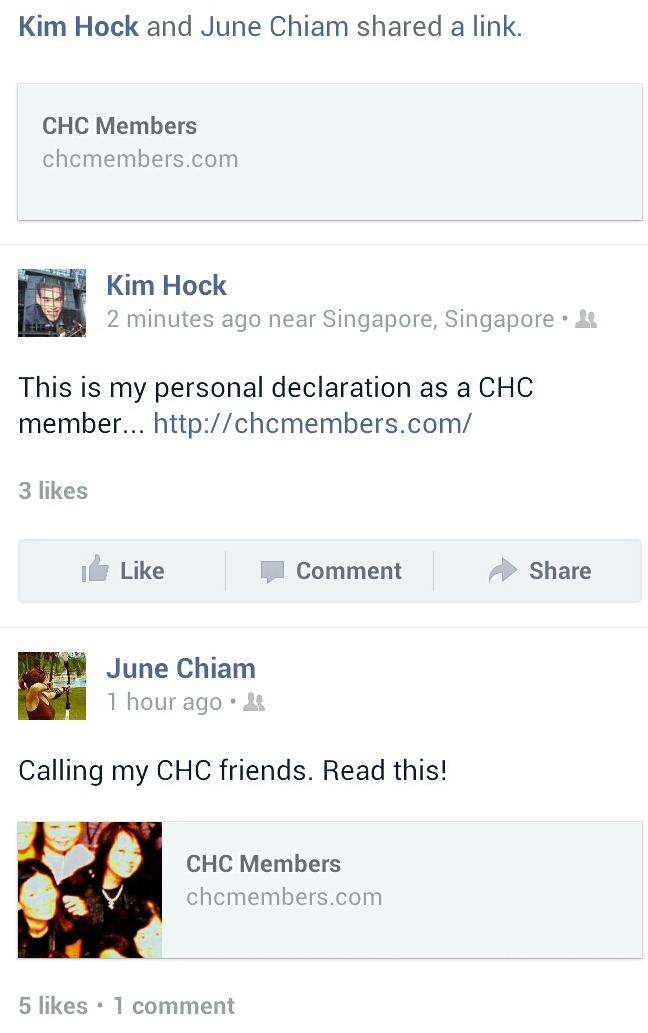 6) Declaration of "Holy War" from a worship leader and Executive Member? 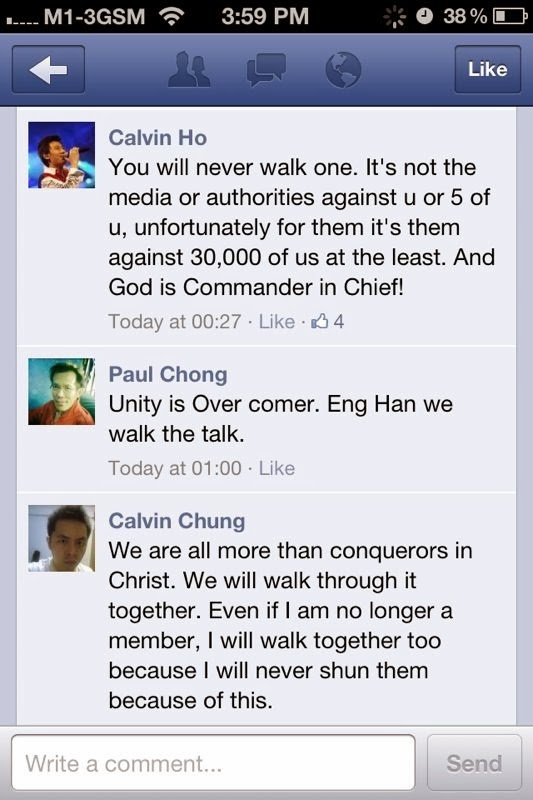 We can go on and on and on with more nonsense but let's look at some interesting articles suggesting the government's tall poppy syndrome: 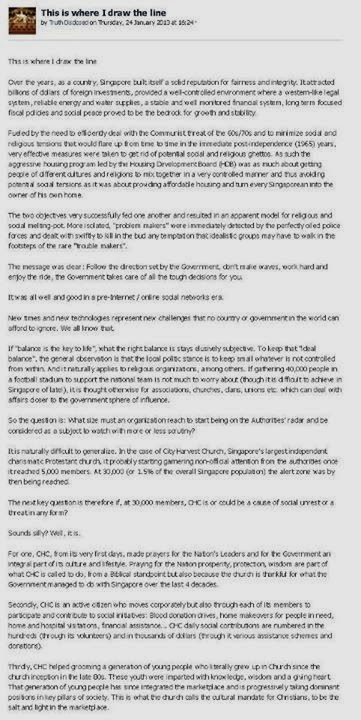 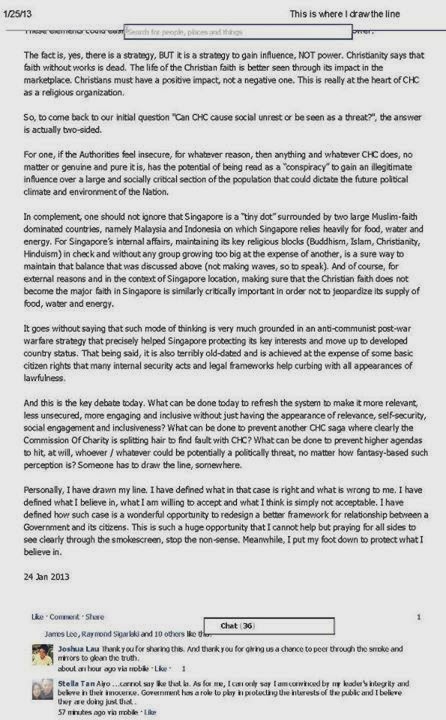 The leadership of CHC even changed their Statement of Belief to show their disapproval of the government - by removing the statement that recognizes that the government is ordained of God, and then lamely replace it with something else. Below is the original statement of belief, captured in early 2012 (before the 6 were charged), and also what was found in the constitution lodged with Registry of Societies: 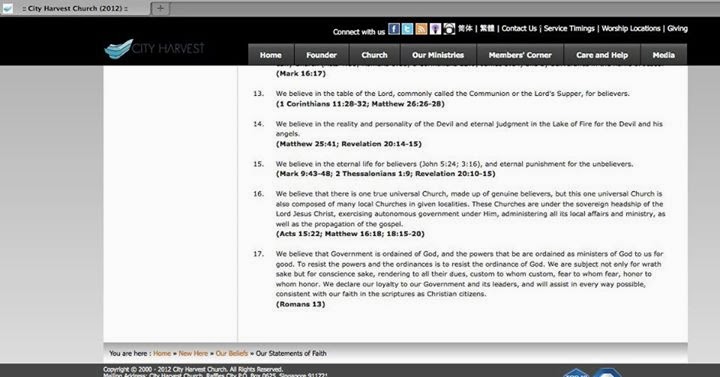 Then this, captured in middle of 2012 after the charges: 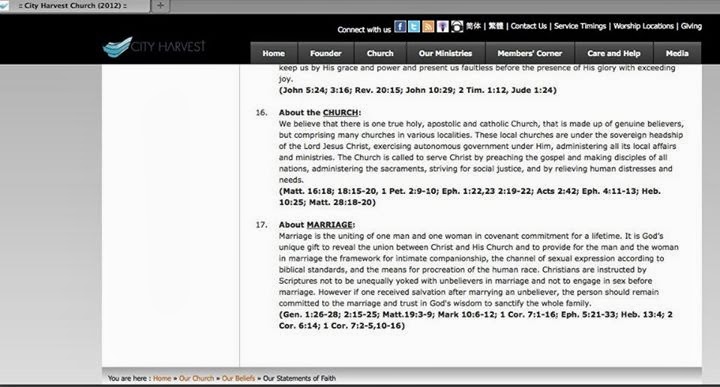 Can the statement of belief, written in the constitution of the church be changed just like this, without having passed by the EMs via a proper EGM?

The of course, when this was found out and first appeared in social media, the church made a u-turn and changed the statement back to the original in late 2013, and then the one that was replaced (marriage) is removed: 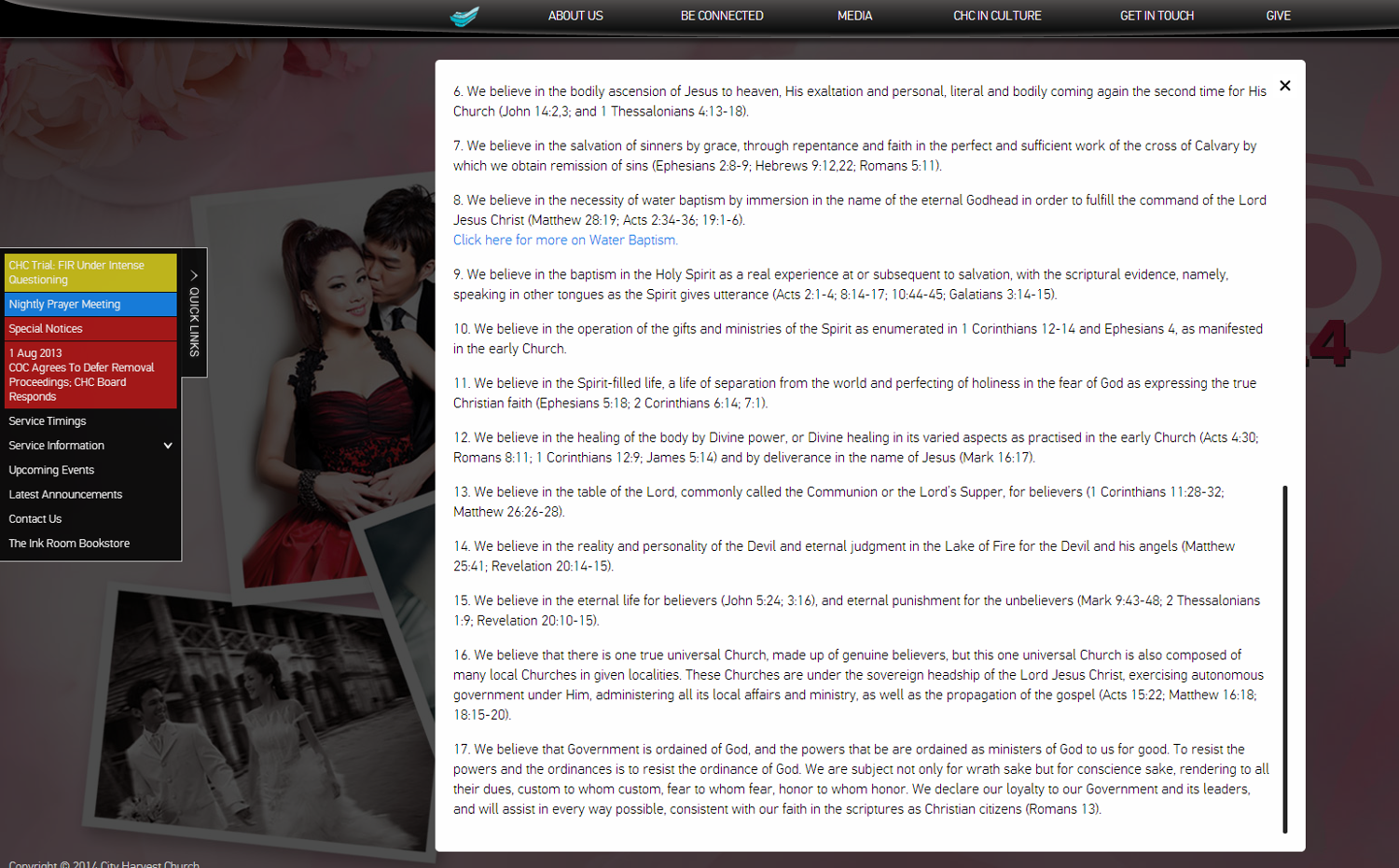 Is The Government Fair?

I cannot claim to be 100% supportive of the ruling party and I do get upset by some of their policies, but I have to objectively say that at least in the area of protecting citizens and maintain law and a strong hand against corruption, they have been rather fair and have demonstrated that they do not bring charges against individuals without proof. What happened to the likes of SCDF Peter Lim, NParks Brompton Scandal, SLA Fraud Case, MHA officer Fraud case, etc. are some examples of the government not covering up, but demonstrating their resolve to tackle corruption and fraud.

So I can only say that in CHC's case, there's a very strong reason why action have to be taken against the 6, and they have been very clear that the charges are not against the church - so why do the leadership want to put the church in the spotlight? Leverage on people pressure?

Are The Leaders of CHC Doing the Right Things?

Is it right to allow the accused individuals to continue preaching and take on key leadership role in the church, while their subjects continue to insinuate anti-government sentiments and rally the church against the government who are merely meting the course of justice?

Is it right to subject the church to public scrutiny in open court, when the book of Corinthians called Christians to judge themselves internally to avoid such a situation that brings shame to the religion?

I think the leaders should be good stewards, and free the church of such shame by stepping down until after the verdict is out.